All that changed the moment I stood at the door of a speeding train for the first time. I don’t clearly remember when, but it must have been during one of my journeys home when I was in college in Trissur. I joined college 11 years ago, so I’m talking about a long time back. We used to go home once in maybe six months. And it invariably used to be a group affair – 3 or 4 of us rocking & rolling all the way! So you can imagine the racket we would make.

And at that age, standing at the door is de riguer. It is even better if you are a smoker. You could then light up standing right at the edge of the door, taking care not to hold on to the bar. Then you would lean back against the door with a nonchalant air and smoke away…..stick after stick. Of course, you would vary your pose once in a while if there were nubile young things around.
Thankfully, I didn’t suffer from such impulses. Plus, the fact that I didn’t smoke somewhat made me a non-starter. But that didn’t stop me from spending hours at the door. A habit that has stuck till today.

Back then, because we used to travel in a group or at least as a pair, group dynamics took centrestage. We used to sing loudly, crack jokes & generally make a nuisance of ourselves. Standing at the door gave us a high. We would have made a racket anywhere, but standing at the door enhanced the experience.

After I started working, my travel experience underwent a subtle change. The chief reason being that my journeys became solo affairs (at least mostly). And I started traveling more often. But the old habit of standing on the very edge has stuck. I can’t wait for the train to pull out of the station,  so that I can do my thing. So much so that, I usually spend at least half the journey at the door.

It seems to me that when you are seated inside on your seat, you are a frog in the well. Whichever way you turn, you only see other frogs in the same well. The view to the outer world is well, blocked. It is better if you have a seat by the window, but not much. Because, though you can see the beauty of the world outside, you still feel boxed in. Your view of the world outside is framed. It’s like the frog is just about able to peep out of the well. While it is able to see the beauty all around, it is not really able to get the full import of it. The frame of vision is too small.

When I stand at the door, the frame of vision suddenly seems enlarged many, many times. I am able to experience so much more, take in so much more. It’s like the whole wide world has been spread out like a giant, multi-coloured carpet for my benefit. 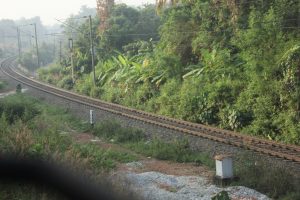 Life at the edge is like a personal conversation between the world & me. I am buffeted by extremes of sights & emotions. One moment, I am looking at a toothless old woman smiling at me through her thick glasses. The very next, I see this cackle of young kids jumping, shouting & waving at the train. This is a frequent sight. I always make it a point to wave back. Their joy is so infectious! I have some difficulty in restraining myself from jumping & shouting like them. It is as well, since I am alive to tell the tale.

One moment I see this buxom young woman bearing her child on her hip, waiting for the train to rush by, so she can cross the track. The very next, I am amazed to see this young turk navigate  the dirt track alongside the railway track on a Rajdoot, with two milk cans hanging from either side! Sometimes, the train slows down & I see workers repairing the track on a bridge ahead. I fear for their safety….I mean, what if one of them falls onto the dry river bed? I can’t get over this uneasiness for several minutes. Not until I see a flock of snow-white birds take off from the bank of a small pond. 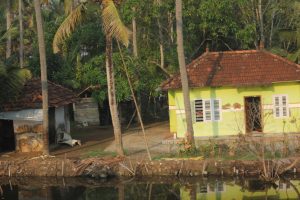 When the train passes through a town or city, I involuntarily take a step backward. As if, all that crowd, noise, dust & stench were physically pushing me back. Some towns can be quite repelling, that way. At the very least, they assault your senses with garish lights & over-loud music. That’s the only time I feel like taking a break from the edge.

In some places, the houses are lined up so close alongside the track that I can witness household scenes through open doors & windows. These are awkward moments, when I feel like an  intruder. I try to avert my eyes from the houses to something farther away. After all, it is not their fault that they have set up home by the tracks.

One of the best sights from the edge is that of the train curving along a bend on the track. Since our trains are usually very long (many are more than half a kilometer long), these bends offer a fabulous view of the entire train. To actually see the coaches connected to one another & to the loco, is to feel the rush in a very intimate way.

Mountains, groves, deserts, rivers, the sea, farmers tilling the soil, mechanics at work, processions of death, temple-festivals, decorated churches, the muezzin’s call, children walking to school, teenagers idling by a culvert, roadside brawls, ….I have seen it all, heard it all. This is not to say that I have seen it all. Not by a long way.

Of course, life on the edge comes with its risks. The train bucks & sways at high speed; so, you have to be very, very careful. You lose your grip on the handlebars for even a moment and you are history. You need a good sense of balance & anticipation. Over time, your body tunes itself with the motion of the train. You intuitively know when the train is banking on a curve, when it is slowing, when it going up an incline and so on. You learn to stand at the edge, just within the frame of the coach, without jutting out even an inch. You learn to remain alert all the while, watching for the mammoth door lest it should swing close on a bend & chuck you to death. The idea is not just to experience life on the edge, but to also live to tell the tale.

In short, it is indescribable.

The man behind the Mohan Veena

A writer’s life: Bengaluru to Mysuru

History through art: Chennai to Kochi